Join the Courtyard Dancers in their collective reckonings of the past two years with a new dance-theater piece based on Armenian music, Ghazal, Tagore and Kathak. We pay our tribute to those and what we have lost as we look forward to the future with renewed energy and artistic rigor.

This is a non-ticketed event. Donations at the door are appreciated (suggested $10). 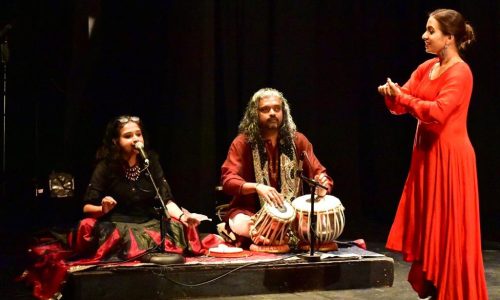 Kathak choreography on poetry Zihal-I-Miskin by Amir Khusrau, on the streets of Fishtown, Philadelphia. Pallabi performed against the backdrop of the mural “The Circle” painted by a Venezuelan artist living in Philadelphia Henry Bermudez

Riyaaz – practice – is more than just the repetition of movement and music. It is a way of life, a path to enter deeply into communion with the body, the self, community, and the world. It is the constant process of polishing the essential while stripping away all that is unnecessary and impeding, including the ego. Previewed in The Philadelphia Dance Journal and reviewed in ThinINKing Dance and Broadway Review. Four East Coast contemporary dance companies come together to explore the many dimensions of Riyaaz, drawing from the rich foundations of their respective styles.

Metiabruz in Kolkata is the place where the British exiled Wajid Ali Shah, who was a poet, an aesthete, and the last emperor of India. In this dance theater piece, Metiabruz (now in the contemporary cloister of Kolkata) is a metaphor for the habitations of poetry in our lives.

September 2015 The Mahatma is Fasting (re-choreographed). Performed at Painted Bride Art Center, Philadelphia, and by invitation at The Philadelphia Museum of Art, 2002.

Newly choreographed a 2002 piece for a new two-day dance and music festival launched by the Courtyard Dancers titled Facing East. The festival was imagined as a collective prayer and protest that united us against violence. The festival celebrated the richness and diversity of Indian dance and music artists in Philadelphia.

June 2014 Asunder Performed at Painted Bride Art Center, and by invitation for Saaz, an organization that promotes South Asian music in Philadelphia (May)

A contemporary dance-theater set to Kathak (Chow taal, twelve beats). Things fall apart. Wholes are ripped asunder. Families, communities and nations. This dance-theater is a meditation on the partition of India.

This evening-length composition used classical and contemporary Indian dance, and live music and percussion and poetry to explore the ordinary stories of unacknowledged lives—from the nautch girls of India’s past to marginal and empowered women today.

Premier of a dance theater piece titled Celluloid Emotions in celebration of Courtyard Dancers tenth anniversary.  Celluloid E-motions uses Indian dance, music, Urdu poetry (Ghazals) and Bollywood dance to explore spiritual/aesthetic and commodified emotions. This work challenges elite and monolithic views of cultural heritage by creating a complex slice of contemporary and past emotional experiences. Anthropologist/film maker Nandini Sikand was commissioned to create a film that was integral to the choreography.

A dance theater impression of the poetry and melody of a Faiz Ahmad Faiz’s composition. The dance form Kathak—like Urdu, Punjab, and Faiz—is a synthesis, a cross-fertilization of Islam and Hinduism, pluralism practiced everyday.

A collaborative dance-theater piece with Bharatnatyam and modern dancer Daniel Singh. The work blends Kathak and Bharatnatyam to explore a new vocabulary of movements to give voice to the South Asian diaspora community. The key concept of this work is centered on the relationships between ritual, memory, body, and identity. By focusing on Hindu and Islamic rituals drawn from Bhakti and Sufi traditions, and through movement and gestures (from Bharatanatyam and Kathak) and day-to-day life, the work highlights what it means to be a south Asian today.

This short composition explores the essence of the aesthetic theory of rasa through the emotional state of longing.  Rabindranath Tagore’s poetry is interspersed with a traditional north Indian song to evoke a heightened emotional state due to the arrival of monsoon. The movement vocabulary is based on traditional Kathak repertoire.

Based on Kathak and various pedestrian movements and gestures the piece choreographs the cacophony of sound and movement that surrounds us. Yet, there is an eternal quest for clarity and sense of self that unites us as humans. This piece blends various percussion beats from tabla, taiko drums, and vocal tones.

2002 Threads: Story of a Sari from Labor to Market. Performed at Kumquat Theatre, Philadelphia, for the Glue performance Series; University of Pennsylvania, Museum of Archaeology and Anthropology.

This thirty-two minute performance piece, inspired by the weavers located in rural India, tells the story of the journey of a sari from villages to the global market. The dance vocabulary is a blend of Kathak interpretive work gestures, and contemporary movements.

A twenty-five minute performance piece, specifically created for Mahatma Gandhi’s birthday celebrations at the Philadelphia Museum of Art. The piece uses song, dance and poetry to interpret his political and moral philosophy and presents his method of nonviolence as a tool for social change.

This piece explores the relationship between performance, play and ritual enactment. The music evokes the festival of colors or Holi, where Radha and Krishna play with colors (abir) with friends in the guise of mere mortals. This is known as leela or divine play.

This is a forty-minute composition; it uses four to five dancers and is a critique of the orientalist rendering of classical Indian dance. Using classical dance movements and everyday gestures, this piece imagines the lives of domestic women workers whose labor maintains the comforts of bourgeois life in India.

This twenty-minute composition uses video and dance performance to represent the repressed history of the (Nautch) dancing girls in India. The dance movements are based on traditional and interpretive Kathak.

Choreographer and dancer Pallabi Chakravorty has a strong sense of the visual and the dramatic. Kali and Shiva dance a cosmic dance to Baul music and then encircle each other in complete silence except for the sound of the ghungroos on their ankles.
Nandini Sikand, Narthaki.com